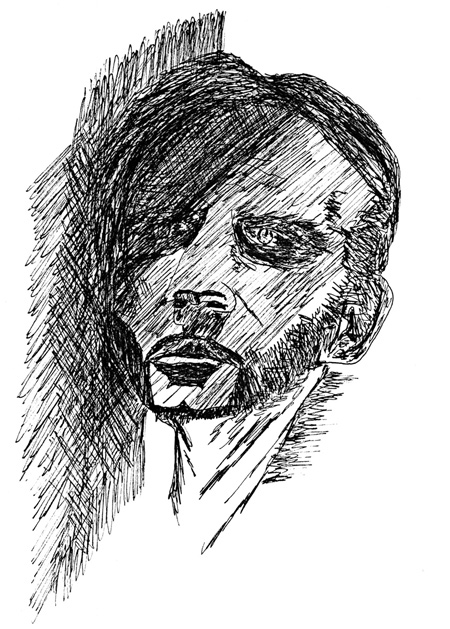 LA NOCHE ANTES (The Night Before)

[This portrait can be found on the cover of La Noche Antes. Published by LOM Ediciones in 2013, it is the fourth and final volume of a tetralogy with the general title of Cortejo y Epinicio (Cortege and Epinicion). Each book of this series represents a stage in the life of a human being. La Noche Antes reflects on old age, the end of the day going into the night, winter.]

Just as there are many levels in David Rosenmann-Taub’s poetry, his drawings are endowed with a multiplicity of meanings, and this one is no exception.

Since a shadow obscures the face, the man’s age proves difficult to determine: is his hair dark or grey? How wrinkled can he be under this crosshatching? How old is he? Thirty, forty or much older? He may be white or black, or any other color.

On the left side, he is entering into the night, or can it be that darkness is progressively covering him though his neck stays illuminated?

Indignation, reproach, and sadness appear in his right eye and hidden indignation in the left, but in this eye a tiny glimmer remains: a bit of vision persists. His pupils focus toward the left or straight ahead. However, his gaze can be perceived some other way: the large dark spot in the right corner of the right eye could be another pupil: the right eye would then be looking toward the right. Since there is a dark spot to the right of the left eye, it can be said that both eyes are directed toward the right.

A close observation reveals that he is not looking at the external world but rather within, pondering: “What can I do? In this set of circumstances I don’t have a choice for any action.” Something is happening to him and he cannot interfere.

The ambiguity of the drawing continues with the undetermined design of the nose: is he breathing or not? His ear is filled with crisscrossed lines: does he hear or not? And is his mouth open or closed? After the passage of a whole life of experience, he may be speaking inwardly.

David Rosenmann-Taub’s drawings are precisely constructed and balanced, with a network of echoing lines, an example of which can be noticed here: the descending shape of the mouth, or what could be a mustache, is a variation of the curve of his hair, and, to create equilibrium, the mouth is closed underneath with the reverse upward movement of a shadow under his lower lip.

The Night Before, the night before the disappearance of this being, the night before what happens next: in a split second, he will be in the “after”. After, there is light or, one can say, nothingness — nothing of what was there before.

The tetralogy Cortejo y Epinicio begins with the first word of the first poem of the first volume, which is “Después”: “After”. The first book therefore takes place “after”. The seasons of man, in these four books, encompass a whole life, and yet actually occur in a moment out of time, the whole series being a unity, one single book. Here, after después, the cycle closes with antes, instead of the expected reverse way.

The reader who arrives at the end of the four volumes has the possibility of pondering the fact that, since time does not exist, there is no “after” and no “before”. The man portrayed here realizes this. Darkness permeates his face; nevertheless, we can also see clear areas beginning to glow in his features. His whole body has already disappeared, eaten up by light. What remains? The visible rendering of his last thought.