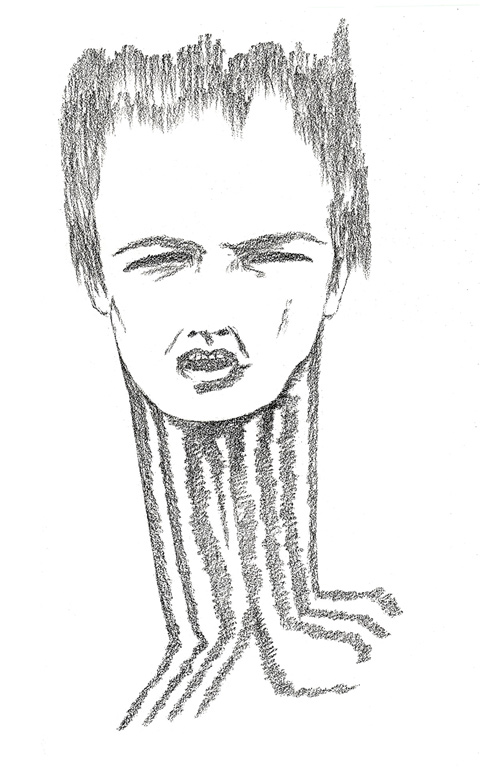 [This drawing illustrates the cover of El Mensajero, the second volume of the tetralogy Cortejo y Epinicio, in which each tome corresponds, among other subjects, to an age of man. El Mensajero takes place at the time of early adulthood.]

He has recently arrived on Planet Earth.

He begins to speak about what he has seen. It is not enough for him simply to deliver a message: when content is important, most people do not listen. Immersed in their usual way of thinking, they do not accept new information. If he wants to make himself heard, the Messenger needs to scream. He does so with the energy of youth; at that age he still hopes that his intervention will instigate a change.

His eyes are closed: determined to remain on his mission, he’d rather not see how poor the attention of humanity is at large. He refuses to envision the waste of time that his exertion might ultimately cost him.

He addresses the message also to himself: it is better not to be distracted by the spectacle of the world. Instead he concentrates on the risk that he may betray himself and postpone what he is meant to do.

A neck made of paws and claws: directly grasping, sucking up reality and translating it into words. The tense, jagged lines evoke the effort that it takes to tell the truth. His throat appears tortured, forced to swallow the atrocities which unfold in front of him and which are accompanied by the impunity that so often benefits delinquents. He knows that, since the beginning of the world, this situation has always been the case.

He bristles in horror at what he has witnessed. A strand of hair rises like an antenna. Highly aware, he perceives what others do not. His vast forehead reveals the elevation of his thoughts.

The strain of shouting the news has opened his mouth to such a degree that his lower lip (to the left) has burst; white on white, light is spilling out though the crack.