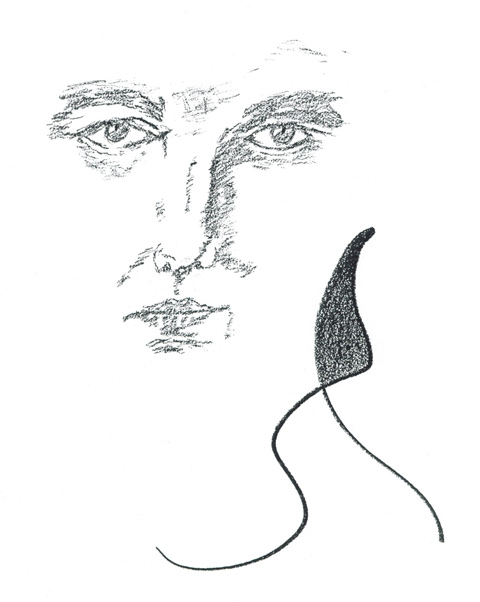 [A detail of this drawing appears on the cover of La Opción (The Option), the third volume of the tetralogy Cortejo y Epinicio in which each book corresponds, among other subjects, to an age of man. La Opción takes place at the time of maturity for a human being.]

Having felt the passage of time for quite a while, he now has arrived at the midpoint of his life. Anything new that he encounters must be placed in relation to his accumulated memories. None of his experiences seems to have brought him peace.

To the left: a conscious eye, in which old age shows; as the result of a long practice, it judges. He now knows that many matters cannot be easily modified and that, when established, they mostly cannot be repaired.

To the right: irony, contempt, and accusation. A special youthfulness lingers in this eye, including the energy to fight.

As mentioned before, David Rosenmann-Taub’s portraits can be accompanied by a “synthesis design” which summarizes the situation. In the present case this emblem is a triangle with two “legs”. The design here actually dominates the composition since it is located in the foreground and is more defined than the face itself. It resembles a stylized person: the front “leg” steps out in a forward movement; the triangle advances with pride and yet reluctance; the curved “leg” to the left lags behind, dragged down by the weight of habits, by activities that mask laziness, by resistance to change, by fear, by hesitation.

“What option is available to me? Do I have a choice? What should I do at this point in my existence? Years have gone by yet I don’t know who I am. All I am sure of is that I am wearing away. I have entered the theater of life and I am keenly aware that the show has certain duration before I will be forced to leave. I am already watching the third act.”

The spectator, who at first might have interpreted the gaze as outer-directed, then understands that self-observation prevails.

David Rosenmann-Taub: “La Opción: a yes and a no: decision and indecision. To have the interior multitude in agreement with one another. A fight in order not to win, but rather to know.” [Quote from the text at the back of the book, La Opción.]