The commentaries on the drawings have been compiled by the Corda Foundation and are based chiefly on conversations, as well as published and unpublished materials by David Rosenmann-Taub. 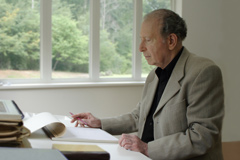 “For me, there is no separation between poetic activity, musical activity and drawing. One could say that I write in Spanish, in music and in drawing. If I were to play with the terms: I draw with words and I write with drawings. Each type of work has its own law and I use the means that fit best what I want to express.” [David Rosenmann-Taub: interview by Beatriz Berger, Poeta en tres dimenciones, Universidad de Chile, 2005]

David Rosenmann-Taub belongs to a rare category: the genuinely multi-gifted artist. Born in 1927 in Santiago de Chile, he manifested his vocation for poetry at a very young age and has since become one of the major poetic voices of contemporary literature. His writings, first published in South America, have been translated into many languages and widely anthologized. Early on, he also displayed a remarkable talent for music, which he first developed under the tutelage of his mother, Dora Taub, a consummate pianist, and which he later advanced at the Conservatory of Santiago. More recently, recordings of his most important piano compositions, performed by the artist himself, have been made available by the Corda Foundation.

He has been drawing all his life and, over the years, has amassed more than a thousand works. At this point, most of them have yet to be released to the public; however, several appeared in Al Rey su Trono (Editions Esteoeste, 1983) and others have been used for the covers of his recent books. These have been published by LOM Ediciones, and include the four sections (2002, 2003, 2011, 2013) of Cortejo y Epinicio, as well as El Cielo en la Fuente (2004), Poesiectomía (2005), Los Despojos del Sol (2006), Auge (2007), and Los Surcos Inundados (2014). The poet-artist introduces the collections of his poems through the cover drawings, precisely relevant to the content of each volume.

As in his poetry and his music, he wants, when he draws, to go to the essential: in order not to distract, he chooses to dispense with paint and to avoid colors. His art is mainly in black and white, achieved with voluntarily limited tools (pencil, pen, ink, charcoal, chalk, ballpoint). Free from extraneous elements, he reaches intimate truths.

Although he has produced landscapes, still-lifes, and abstract compositions, most of his drawings are dedicated to portraits, many of them close-ups. He does not rely on models or photographs: endowed with an exceptional visual memory, he brings back to mind, for inspiration, people he has met, sometimes years earlier, or has watched with acuity from a distance. He may also combine features he has observed here and there to create an original face. Reality being rich enough for him, he has no need to resort to imagination.

What is depicted is not an isolated moment in the existence of these individuals; rather, the whole life of each one is captured and summarized in its fundamental truth. Their unveiled faces disclose who they are: their most private feelings, the values they hold dear, the contradictions which tear them apart, their deep-seated wounds, irreparable mistakes, disappointments, the shock at being betrayed by trusted ones or bewilderment at the realization that the promises they thought this world held have been trampled: a description of human destiny. Subjects may be observed weighing crucial decisions or caught when they are at the epitome of contact with themselves. Stripped of defenses by the clairvoyance of the artist, they expose a whole gamut of emotions: anger, desire for revenge, despair, lucidity, disorientation, melancholy, pride, determination to go on in spite of it all… “In order to exist with meaning, one must tear off the mask.” [David Rosenmann-Taub. Ibid]

David Rosenmann-Taub’s art appears to be spontaneous, as if it had been done at great speed. This is not the case: each piece takes shape during an extremely slow process that the elaboration of the strokes demands. The sureness of the lines testifies to a great technical mastery: he does not allow himself any corrections or erasures.

Thanks to an innate sense of the golden mean, he constructs his art through a play of correspondences and echoes that achieves a global balanced state: his drawings, no matter how complex, rest on a mathematical basis of the proportions.

We may think at first sight that the portraits are realistic because of their recognizable features, but close examination shows that the draftsman takes all kinds of formal liberties with the images. David Rosenmann-Taub uses human features to represent states of consciousness and in so doing he is free to deploy whatever serves his expressive goal. The faces may be seen directly from the front and, simultaneously, in three-quarter profile, or the points of view of the right and the left sides may be situated at different distances. [To avoid confusion and be consistent throughout the commentaries of the drawings, we will call “right” what is right from the point of view of the reader, and “left” the reader’s left.] These subtle discrepancies make the drawings vibrate, so to speak, endowing them with a life of their own. We soon forget that we are looking at a piece of paper laced with pencil strokes: the stylized images are intensely human and animated.

A unique feature is included in a number of the portraits, what can be called a synthesis design, often represented by a linear shape. Its presence is an essential part of the drawing’s general equilibrium and expresses in a summary way the emotional and mental state represented, thus providing extra information about what is taking place.

The texts accompanying the drawings are meant to provide keys to facilitate the understanding of the artist’s intentions, but they do not exhaust what these works have to offer.