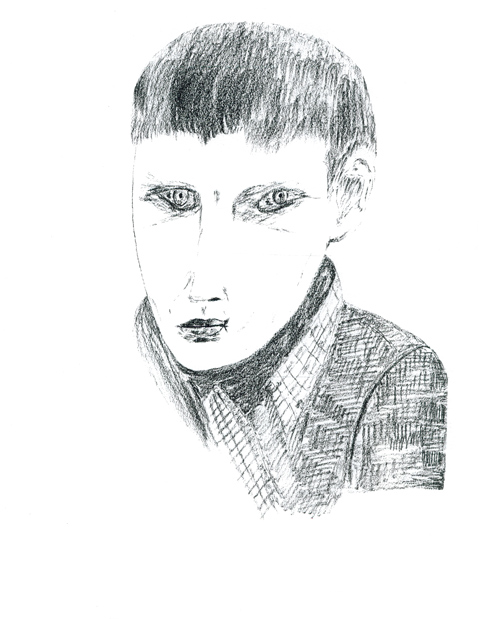 She never thought about disease, aging, or death: she was too young for these concerns. She did not realize that, because of her disorderly life, she was ruining her health. Can she ever recuperate? Perhaps, if drastic changes are introduced, she will have a chance of survival – although her effort might not be enough. She has long ignored the fact that she, like everyone else, must submit to the progressive erosion of her physical self.

The sclera of her eyes is dark: she feels ill, having not slept for days out of anxiety and regret. To the physical damage that she has done she is adding a desperate sense of self-accusation, of having neither been aware in time nor having taken protective measures. The horror of the discovery that she may be in perilous straits gives her the expression of a trapped animal.

The texture of her outfit is prominent, rendered with an intricate profusion of pencil strokes. She is dressed with several layers of fabric because she constantly feels cold. Belatedly, she tries to take care of her body by armoring herself with clothes and attempting an air of elegance.

No wrinkles trouble this smooth face, still youthful, but she looks extremely pale. Her mouth, though, is deeply colored. Did she bite her lips to the point of drawing blood? Or did she use lipstick to mimic health?

Since only one shoulder is represented, the drawing could have given an impression of leaning to the right. However, the mass of her ashen face and that of the white empty space to the left play the role of counterweights, allowing this apparently lopsided composition to remain in faultless equilibrium.