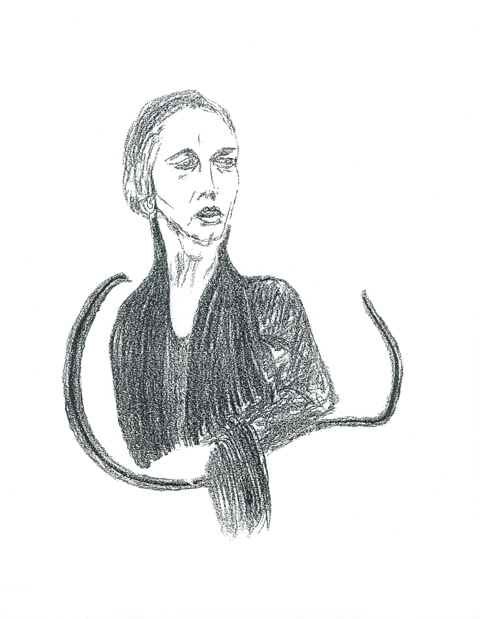 Suddenly, in front of an invisible jury, she finds herself wrongly accused.

She never expected to be viewed in such a negative way.
She does not want to assume the offensive but rather to defend herself. Yet she is cornered. Taken aback, she does not know what to do: she has only her pride for a shield.
Indignant, greatly pained, and lost, she strives to avoid showing her inner turmoil. She must appear strong.
The synthesis design, which hovers in mid-air and on which she rests her arm, offers her some stability: she can only count on herself since nobody flies to her rescue.
Her hand remains unseen as if she has been maimed by the slander.
The shawl swathing her neck offers protection and helps to maintain her uprightness; it presses tightly against her, as if at this moment she feels strangled.
Dark lines etch her throat: she cannot swallow the indictment.
Her eyebrows are raised in repulsion, her mouth opens in surprise and disdain.

The single, deep vertical crease on her forehead summarizes the entire drama and discloses the extreme tension that gnaws at her.

With hauteur, though, she turns to face — and to judge — the judging party.