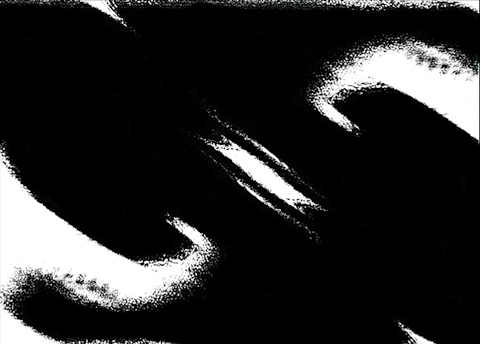 This drawing was presented to the public for the first time on the cover of David Rosenmann-Taub’s CD En un lugar de la Sangre (In a Place of the Blood). It is a spoken and pianistic suite inspired by the personality of Miguel de Cervantes and by the essence of his novel, Don Quixote, which is the manifestation of his spirit. All the characters in the novel are aspects of himself.

The title of the music and of the collection of the poems in En un lugar de la Sangre is a variation of the beginning of the novel’s first sentence: En un lugar de la Mancha de cuyo nombre no quiero acordarme… which, translated literally, means: “In a place in la Mancha, the name of which I do not want to recall…”

“La Mancha”, a region of Spain, represents the world. Cervantes does not want to remember his dreadful life on earth.

Another interpretation of the drawing: to enter someone’s memory, to penetrate a night in which some light still persists.

Cervantes’ thinking no longer exists among the living; it has become part of the cosmos. The poet may say to the novelist: “You, Cervantes, can forget everything. However, I make you come alive and you make me live within you. Your shadow illuminates me. Your difficulties, your weaknesses, and your talent help me bear my own difficulties and give me the will to provide the efforts that my vocation requires. I know what happened to you during your time on earth and I have experienced similar feelings. You’re not the only person who wants to forget his life”.

“La Sangre”? The blood is what is vital. So: “In a Place of the Blood” can be taken to mean: “In a Place of What is Vital”, but a site of suffering as well. Each person is a receptacle for this suffering, especially when one is a real human being.

The three large white designs in the drawing stand for three characters in the novel: Don Quixote (on top), Sancho (at bottom) and Dulcinea (in the middle).

Los curiosos impertinentes speaks about the wish for a man to be with a woman and also his lack of connection with her. In this short story within the narrative of Don Quixote, a man, Anselmo, seems to be the very good friend of another man, Lotario. Yet at the same time, Anselmo also thinks of Lotario as a potential rival for the heart of Camila, the woman he loves. Although they are married, Anselmo does not know who she is and she does not know who he is. He ultimately sets up a situation that leads to disaster. This tale is similar to the story of Don Quixote: he wants to do something well, but this endeavor results in the worst possible outcome. Who would want to remember that? Yet memory endures.

The central design in the drawing plays a double role: Dulcinea between Quixote and Sancho, as has been mentioned before, as well as Camila between Anselmo and Lotario. Two stories with three characters, two men and a woman. In the center, the two thin lines represent the two men who are approaching a woman (the larger diagonal shape).

Relentlessly a man draws closer to the feminine, only to become distant from her: hooks turned in the opposite direction at the end of the two elongated patterns indicate a withdrawal.

Don Quixote describes journeys during which the hero leaves his house to seek out adventures and then comes back home. The drawing reflects this in movements in opposite directions, an excursion and a return.

In a Place of the Blood: where light and darkness struggle within consciousness; a competition between wakefulness and slumber.